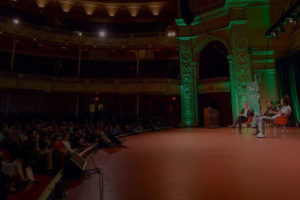 If humans and technology had a Facebook relationship status, it would read: “it’s complicated.”

In many respects, the proliferation of technology has improved the human condition. We have less poverty, less hunger, and generally less large-scale human suffering than at any point in human existence. However, many also argue that we damage (some say irreparably) our environment, dismantle basic human connectivity, exploit those most vulnerable, expand an already disparate wealth gap, and may even (voluntarily or involuntarily) rewire our brains.

We’ve integrated certain types of technology into our lives in many ways. 1 out of every 4 humans on Earth are on Facebook. There are nearly 4.8 billion mobile phone users. That number may surpass 5 billion by next year. According to the International Telecommunication Union, 3 billion people are on the Internet — most likely looking at cat videos.

Figures vary, but there are at least 1.4 billion cars and trucks currently in use around the world. Some of these “drive” themselves. Over 40 cities are testing autonomous vehicles on their streets. One of those cities is Pittsburgh.

Uber’s Advanced Technology Group (ATG) started operations here in the Steel City in 2016, and since then, spaceship-esque Volvo SUVs equipped with LIDAR are a frequent feature on Pittsburgh roadways. In some cases, these “driverless cars” (there are Uber employees in the front seats) take people to work, out to eat, to sporting events, or even to dog parks in relative safety.

That notice came this week. Uber announced its autonomous vehicles would return to Pittsburgh city streets next month. Pittsburgh’s Mayor, Bill Peduto, was none too happy, citing a number of “required conditions” for Uber to continue its operations — namely a full federal investigation, additional testing, and miles-per-hour limits (25 MPH, to be exact).

Pick your own horse to back here. Whether Mayor Peduto is justified in his response, or whether Uber is acting appropriately or could perhaps be a better neighbor is excellent content for public debate (maybe even at Thrival).  In fact, people are already voicing their opinion throughout the United States. Check out HERE, HERE, or HERE to form your own opinion.

Whichever horse you do back, remember that it is already out of the barn. It’s off of the farm. It’s actually in your living room watching Netflix and chilling.  And the horse is using your place as an AirBnB; Uber has committed to 24,000 more Volvo SUVs between 2019 and 2021.

This most recent City of Pittsburgh vis-a-vis Uber kerfuffle is simply par for the course in the world in which we now live. Scenarios such as this will only become more frequent, with higher stakes.

In fact, Carnegie Mellon University’s Dean of the School of Computer Science saying that 2015 called and it wants its technology headlines back. “Self-driving cars are so 2015,” Andrew Moore said half-jokingly at the AI/Robotics Venture Fair in Pittsburgh this past Wednesday. He then went on to describe an autonomous battleship and an autonomous helicopter created by Pittsburgh talent.

As technology advances, we must all strive to be better informed, and to be, ultimately, better citizens, as technology weaves itself into our daily lives. This is why Thrival focuses so heavily on the concept of “Humans X Tech.” It is this relationship — at times contentious, at times complimentary, at times symbiotic — that will define the next 100 years. And Pittsburgh is in the driver’s seat, both figuratively and literally.

There has never been a more urgent time to engage, learn, and connect with one another as we navigate this new era together. At Thrival this year, we’re taking a deeper dive into multiple aspects of this so-called “Fourth Industrial Revolution,” examining the future of work and job readiness, the impact of advanced technology on society and culture, the challenges and opportunities facing innovation ecosystems, and much more.

There is an old truism:

“There are two sure things in life: death and taxes.”

Maybe we should say,

“There are three sure things in life: death, taxes, and the exponential increase of computing power according to Moore’s Law.”